This is a follow up to my earlier post in which I set out my initial Cheltenham views for the big races and with the benefit of having seen last weekend’s races.

I’ll stay with Jezki although this is turning into one of the best for years. My Tent Or Yours (henceforth MTOY) was mightily impressive as a novice in the Betfair Hurdle (Schweppes) and I’ve never seen such a good winner of that race. Will JP want to run them head to head?

I’m still with Zarkandar but we’re really none the wiser about this one. Zarkandar is currently 6/1 and that seems to me a great price before tomorrow’s race. I’d take the possible run of MTOY more seriously than some have. I think that the last one to take the same route was Make A Stand.

I think that Henry de Bromhead has more or less given up on Sizing Australia judging by an interview with him that I saw after the last race. Uncle Junior was uninspiring and new favourite Arabella Boy now appeals more.

Willie Mullins has now confirmed that this is the target for Quevega and all’s well as she goes into full training. She will win.

I heard an interview last Sunday with Willie Mullins which certainly didn’t put me off Pont Alexandre. There is every reason to believe that this is a star now and in the future. I saw a tweet from Graham Cunningham in which he agreed that some of the coming horses at Cheltenham could be be with us for years to come and I agree as well. What does Willie think of him from the outset? (A Cheltenham winner.)

I loved Pont Alexandre the moment I saw him. His trainer in France [Laurent Viel] told me that he was as good a horse as he has ever had. Up until about a month before I ran him, I was wondering if he really was going to be that good, but then he started showing me a little at home, and I started to think, he might just be as good as he looks.

And after his first outing for him (the first time he has put a horse in a Grade One on debut for him):

I was obviously delighted with him when he won that day. That he was able to beat top class opposition on ground that he had never encountered before. And he impressed me again when he won the Grade Two race at Leopardstown 10 days ago. It wouldn’t have been easy making all the running on the day, with the ground and the wind, but he is a hardy individual, and he has pace.

The current odds (3/1) seem far too long given the increasing paucity of opposition and this is one to back now. I have at a shortening 14/5 on Betfair.

I still see no reason to depart from Dynaste, shortening slightly at 9/4. The potential opponents seem to be drifting away from this race so this is another to get on now. Betfair is currently offering only 2/1 – a strong sign.

Now this, along with the Ryanair and the Gold Cup, are the main reasons for posting at this time. There was a great deal of hot air about Flemenstar running in this race after what I predicted as the outcome of the Irish Hennessy. Apparently he was suffering a “serious lung infection” in the race which is why he is unlikely (now not) to go to Cheltenham. That wasn’t a bad performance for a horse with such an affliction! The owner/trainer/jockey divergence has been, frankly, unseemly, but now the target is apparently the Melling Chase at Aintree (over 3 miles for a horse which, we are told, doesn’t travel (to distant races) or stay (over 3 miles)). Right, that’s quite enough about that one!

So, Sprinter Sacre will win! The 2/5 when last posted is now 1/3 and I can’t see him getting any longer; probably much shorter. This will be one of those occasions when betting doesn’t matter (unless you have a deep pocket) and it will be just a joy to see a masterful performance.

The performance of Mail de Bievre in the 3m Denman Chase, particularly his jumping, attracted the eye and the possibility of a supplement for this race should not be ignored. The Champion Chase requires an exuberant front runner and this one did just that, without staying (currently an appealing 20/1).

What to make of Captan Conan’s hard fought win at Sandown when 1/2? Quite a lot I think. He stayed well on heavy ground and fought to win and I think that he’ll be much better on good to soft. Don’t forget his run in the Henry VIII on soft in December. A very good win against decent opposition. The current 5/1 is good value but this is one I’ll hold on because I think that there’s better to come (price, not competitors).

This was, as previously advised, the obvious race for Cue Card. The current 11/4 for tomorrow in the Ascot Chase is outstanding value and should be bought big. Captain Chris supporters might think otherwise but a choice has to be made and I’ve made that choice. Flemenstar won’t be complicating things and Cue Card will be a short priced favourite after tomorrow’s outing.

It’s a bit weird that Tidal Bay is still quoted by Billy Hill for this (not good) but I’m still very happy with Reve de Sivola (take the price now – 9/2). Most of the opposition have or will shortly fall away.

Everyone who has said that this will be a classic (as will the Supreme Novices’) is right. I think that Rolling Star (11/2) will dominate this race.

You already know my positive view about Silviniaco Conti (5/1). Why won’t he win? Bobs Worth is the only serious answer but I can’t have him. Take him out of the equation and this one is the winner, particularly after his dogged effort on soft (good for 3m 2f at Cheltenham) win in the Denman Chase. 100% bet at great value.

I’m keeping half an eye on the potential candidates for the Foxhunters’ Chase. I note that Cloudy Lane is out this weekend (not my choice). I think that Salsify’s win was impressive but I suspect that there will be a new hunter in England who will take this. As always, and credit to the man who has pointed me in this direction (GKR), I will be guided by the jockey choice!

A slightly unusual choice for one of my previews but self interested because I’ll be there. 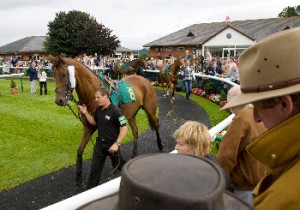 Overall, I think it’s an above average card for Bangor with a number of interesting runners. The going is soft, heavy in places which should provide a fair test.

Golden Hoof (8/13) won well in a Class 4 at Sandown in December and earned an entry in the Grade 1 Tolworth Hurdle where he was readily beaten. This is back to his level and he should win comfortably. Blackwater King (9/4) ran well (2nd) in a Class 4 at Doncaster where he was beaten by the subsequently beaten Renoyr and should be respected, along with Gee Hi (6/1), a ready winner in a bumper at Taunton on 19 January. For placepot purposes (winner required) I’ll be with the front two in the market.

This is all about Harry Fry’s Violin Davis, a Grade 2 winning hurdler who couldn’t have been more impressive over fences at Newbury on 16 January. A confident selection, albeit at a very short price (2/5).

A really decent and hard to solve race. I’m a big fan of My Flora (9/1), a serious hunter chaser, but I fear that she’ll be outpaced now in open company, particularly judging by the last race at Uttoxeter. Donald McCain’s Dungeel (100/30) has done nothing wrong but O’Faolains Boy looked very impressive on his Chepstow debut over hurdles on 5 January and has the benefit of a 7lb claimer on board. Although not favourite on the initial forecast he’s now a thoroughly justified 2/1. Midnight Appeal (9/4) also deserves respect.

This is likely to be a really tough test and one of them will be plugging away at the end to win it. Generally this type of race goes to a slogger rather than a high quality horse and form over a similar distance is vital. That excludes Alderluck (6/1). Double Dizzy (14/1) won the Sussex National in 2012 and ran a creditable 3rd on 6 January but I suspect that he is a course specialist. My Boy Paddy (4/1) looked at his limit at 3 miles in a Class 2 at Chepstow on 8 December so, at last, I’m going to oppose a favourite. My selection is Ten Fires (8/1), a redoubtable stayer with lots of decent Irish form.

A fascinating although not high quality race. Several of these have flat breeding and have ended up here, probably as a result of not living up to expectations. I’ve got a strong view here. Having watched the form I think that Engai (3/1) is far better than the rest and should be a much shorter price. A confident selection.

Well, what to make of this? Three of the runners are having their first ever outings at a racecourse so I’m glad I’ll be there to see them in the parade ring. Molly’s A Diva was my initial selection but she’s won at 8/1 at Huntingdon today with August Hill 5th so I’ll assume that they’re non-runners. I’ll therefore plump for Donald McCain’s Tonvadosa, a very taking 9l winner on heavy at Towcester on 20 December at an appealing 5/2 (currently).

I like to think (no doubt foolishly) that I can spot a winner in many hunter chases. There is obviously something of a lottery feel to many of them but picking those who take it seriously (both jockeys and trainers) can often pay off. I strongly disagree with the market selection of Thats Rhythm (8/5) and much prefer Marky Bob (7/2), a facile two time distance winner at Fakenham, ridden on this occasion by Mr Phil York, a point to point stalwart.

So here’s the placepot or Bangor Bet, or whatever it is!