I will not be at the National preview at Rigbys or watching the first day of the meeting for personal reasons.

However, I will be picking up on what is now a proper Festival with superb “support races” from Friday.

We should start with John Francome’s wise words concerning what the the National now is:

While I don’t share Francome’s negativity about what the race now is – it had to change and last year was an unqualified success – it is vitally important to bear in mind that staying rather than jumping is the key. He makes a very good point that 120-125 stayers won’t get in the race but it is what it is. Having said that, this maybe gives us an angle into the race by focusing on stayers who do make the cut.

So, let’s start with Long Run. It’s hard to believe that he’s only a 9-y-o. This season cannot be seen as anything other than disappointing. However, if you looked at him as a coming horse for the National then it’s not so bad. The Gold Cup confirms his class, as does any number of Grade 1 performances. He’s the best horse to run in this race for ages. No-one can criticise his jockey over the fences and he has stayer written all over him. The bottom line question is straightforward – is he knackered? There is evidence to suggest that he is. If not then he wins this easily against far inferior horses. That is the dilemma.

Next is Teaforthree. Look at how close he is at the last fence last year. He has to be taken seriously but I’m still unconvinced. A superb bet for a place so bear that in mind with the first six options that will no doubt emerge this week, subject to a 10/1 or similar SP.

Tidal Bay is a lovely horse that Paul Nicholls has shown what can be done with after the transfer from his errant former trainer. However, for all of his renaissance, this is just not the right option. A horse that has been juggled from hurdles to fences, his valedictory run was the extraordinary win at Leopardstown over a year ago. His late run could provide one of the greatest wins ever (Red Rum and Crisp) but I really can’t see it.

I’m sorry to say this for connections (save that I’m thinking about all other connections) but I’m of the view that Monbeg Dude has been media promoted all as a result of those connections rather than ability. He’s a decent horse but I can’t possibly see him as a National winner. That said the form view is always there to kick you in the National but that is the only basis on which I see this one winning.

Prince de Beauchene
Surely this is a runner by default, i.e. because there is no other obvious option (unlike On His Own). Just can’t have him. 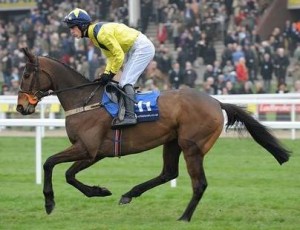 Now then, Pineau De Re is my idea of the winner (at a current 20/1). I may be way off the mark but I suspect that this one will be much shorter come the day. The good doctor (Richard Newland) has worked hard with moderate horses for a number of years but this one fits the profile perfectly, as I currently see it. He fell in the Becher (when off 135) but his placing in that race, followed by hurdles (save for a chase win at Exeter over 3m) and his excellent third to Fingal Bay in the Pertemps is an ideal prep. At the current price he’s also an excellent each way choice.

Rocky Creek, Triolo d’Alene and Burton Port are all horses deserving their places in the race but I don’t see any of them featuring in the places. Balthazar King has his place in the betting by virtue of his aptitude for Cross Country races but his 15th in this last year and his 1st at Craon on a mad course in September and 1st at Cheltenham in this year’s Cross Country emphasises the difference between the disciplines.

Of the others, I have none. I’m pretty confident that the winner will come from the horses I’ve highlighted. Of course, a result like last year’s could make me look a fool but they rarely happen in successive years.

Our Conor wins the Triumph Hurdle (2013)

Well it was a day of mixed fortunes on Tuesday with Wicklow Brave running very well but Ruby well and truly made the right choice with Vautour putting in the best performance of the day. I got Champagne Fever and Trifolium in the correct order but could never have chosen the unlikely winner Western Warhorse. The demise of Our Conor cast a shadow over the middle of the afternoon but at least Quevega in the Mares’ and Present View in the last prevented it from being a blank day for selections.

On to another day and time only for quick selections.

Is a replica of this what we are going to see tomorrow at about 2.20 p.m.? I think so. This horse, Champagne Fever, truly deserves the title “Cheltenham specialist”. His ability to power up the hill after a fast two miles is vitally important. His prep races have been just that and this is the day that matters.

What of the opposition? Trifolium is a serious contender and rightly now second favourite. His win in the Irish Arkle was hugely impressive but Felix Yonger needs a further trip (more of that later this week). Rock On Ruby is a fine horse but has not been properly tested over fences at this level and you have to think that, at his age, this is an afterthought. I have Valdez running well in third place and the others distant. So there’s a trifecta to start the week!

Now for the remainder of the card.

This is between the top three. Several are there for a day out for the owners (nothing wrong with that!). Irving could live up to the hype and Vautour is very good but, notwithstanding Ruby’s decision to go with him, I’m sticking with my prior selection Wicklow Brave, an impressive horse and consistent. So I’m choosing to oppose Ruby but, hey, you have to do these things sometimes!

This is much more my type of race. Alfie Sherrin is the confident choice and the selection of AP McCoy. I can’t claim this because several people have observed that he’s been lined up for this and it’s worked out for him. The prep has been perfect and the opposition is not great. I’ll definitely be on Nigel Twiston Davies’ Tour Des Champs for a place.

I inserted the 110y for the proper distance of the Champion Hurdle. It’s not often that it’s really made a difference but what certainly has is the ability to stay up the hill. You need a horse that stays a good deal further than two miles on a flat park course and it amazes me how often people miss that (me included!). I think that top level course form is hugely important and that is why my shortlist is narrowed down to Hurricane Fly and Our Conor. Dessie Hughes knows how to win this race (Hardy Eustace whose profile was not dissimilar to Our Conor). I will be delighted if Hurricane Fly wins but my money will be on Our Conor – obviously up to this standard, capable of staying up the hill and likely to have been fine tuned for this. Barry Connell will not be bothered about the absence of The Tullow Tank from the Festival if he captures the hurdling Blue Riband.

Ignore those trying to talk it up as a contest, this will be the easiest ever win for Quevega and she’ll absolutely dominate this lot, like she has when facing inferior Irish opposition after her previous Cheltenham wins. This is the banker of the meeting and 4/6 and 5/6 currently on offer is a gift. Get on now in all combinations because she’ll be much shorter at the off. WP says that she’s had an ideal preparation. If you’re brave then there’s a good case for putting all your week’s fund on this one. I’m not quite that brave but I can’t contemplate her losing!

As an aside, one of my biggest failings for the Festival has been betting on all or most of the races. Having followed the NH season avidly, there is no requirement to bet on every race (albeit that there is a temptation to do so!). My best returns have been based on picking four or five horses out of 27 races (I think that’s right) and believing in what you’ve seen.

So, having said that, I’m now choosing a horse for a race I should perhaps be avoiding because of its tendency to turn up a long odds winner! I’m all over ShutTheFrontDoor. This horse has a perfect profile for this race. Nina is riding, Foxrock with Katie Walsh on board is a threat, Shotgun Paddy deserves respect, but I can’t see my selection being beaten!

Now this is one I’d avoid. I have friends who have “got out” on the last on day one on several occasions but I never have. I think that it’s between Art of Logistics and Present View and if I’m overflowing with money by then (I very much doubt that I will be) I might have a few quid on the latter.