There are mixed views about whether the massive rollovers for the Scoop 6 are a good thing. It could have been won long ago if races were selected that gave the punter a fighting chance. Some have said that it’s now no more than the equivalent of a Lotto ticket.

I don’t agree. The selected races have been bordering on unfathomable at times but there have been bizarre results (e.g. last week) which have contributed to the current vast sum available. If you’re interested in horse racing and spend a little time checking the form for each of the races you can generally eliminate 50% of the field, based on average results. It hasn’t worked for weeks and months but it will eventually. Of course you might lose by any one of the other 50% winning any of the races but, with average fields at, say , 14 runners, that’s narrowed it down to a 1 in 7 selection per race. That’s a 1 in 117,650 chance overall, compared with a 1 in 14 million chance of winning the lottery!

There is then the place fund which wouldn’t be bad!

There is also the question of syndicates placing high multiple stakes and  thereby excluding small stakes punters. The bet is susceptible to a guaranteed win if all horses are covered but that requires such a vast bet that the investment isn’t worthwhile. That’s why critics of the difficulty of the bet are wrong. It has to be difficult enough to avoid a guaranteed win so it can’t include small fields and short odds.

Anyway, on to the selections!

After all that it’s 7/1 the field! I think that this is a two selection race with Discussiontofollow on the form and Out Do as the improver who could deliver.

I think that this has to be a three way option with Wahaab, Penny Drops, and Mick’s Yer Man. I’m also considering Supplicant but that’s one too many.

Joyeuse is the obvious choice and should win. If you’re worried about the cost of multiples just go for this one, shit or bust! If you want others add Spinatrix and Blithe Spirit (in that order).

This is just not a good race so beware! It has a long odds winner written all over it but, eventually, likely winners will win. This could well be the Scoop 6 defeater but you have to assume that it won’t be. On that basis we’ll go for Khelman and Johnny Cavagin. This is an obvious race to go for the unnamed favourite and I think that will be my choice.

So, if you’ve got as far as this one it’s very exciting! I’m still thinking about the possible place payout (a tasty placepot alternative) so, what to do! If I tell you the truth they’re none of them that good so there is a definite lottery aspect for this race. I’ll definitely select the unnamed favourite and Zarwaan on the basis that I’ll still have a place shout. By the way, if I have by then I’ll be partying like it’s 1999!!!

Jeremy Clarkson and the N word. Worry about those who do use it and mean it. And then wonder about the future of UK politics.

This business with Jeremy Clarkson and his possible use of a plainly unacceptable word is playing out on social media in an interesting way. Bizarrely, my thought process has led from this to the possibility of a political shift of seismic proportions! 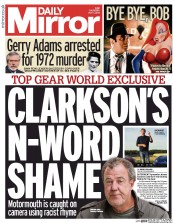 What do you think? I’d say that he was conscious that he shouldn’t use it. I’d also say that, based on that audio track, he didn’t use it, or, if he did, not in a loud and pejorative sense.

this is my statement. http://t.co/mfOqcltZAV

3. What is the origin of the rhyme?

Jeremy Clarkson is three years older than me. Did he hear the rhyme (in its original form) when he was younger? Yes, undoubtedly, as did I, many times. Was it the default version of the rhyme? Yes. Is it acceptable in 2014? No. Was it in 1955? Well, with the benefit of hindsight probably not but it did appear in media, notoriously as the name of a black labrador in the lauded film The Dam Busters. It was used because the film was based on real events and that was the name of the real black labrador owned by RAF Wing Commander Guy Gibson so it was accurate, and the film was praised for its accuracy. Film Four recently played the film without edits and I think that, on balance, they were right to do so. US TV versions changed the name to “Trigger”!

4. That was then, but what about now?

The word is used, frequently by black people and particularly rappers. Is that use divisive? Yes, of course it is. I think that the best analysis of this dilemma is explained in this article and this observation:

I’m an African American, and I often experience a strange feeling of queasiness whenever I’m riding in a car with a white friend and a song by a black artist is playing in which ‘nigga’ is repeated often. I can’t explain it, but there is almost a feeling of embarrassment. Whether this means that I think the N-word shouldn’t be used I’m not sure, but it does let me know that the answer to the question can’t ignore the social consequences of saying it.

Yes, I would, about many things. He is a controversialist but the Daily Mirror has chosen the wrong target this time. I don’t think that you can say that Jeremy Clarkson is a racist on the basis of the available evidence. I think that he’s someone who plays up his image on the basis of being controversial as demonstrated by those terribly forced “news features” in Top Gear, but they’re harmless and no doubt very amusing for the target audience. Nothing like what has been alleged would get near to that item.

5. What should we be worried about?

It is astonishing that this “not news” item has hogged the agenda when there was much better material available. Michael Crick on Channel 4 News happened on the same day to expose a UKIP donor whose views are, even by their standards, extreme and repulsive. Demetri Marchessinini is an extraordinary individual. I think that the best way to deal with this is to let him express his views in his own words:

UKIP is currently running on 38% for the European elections, with Labour on 27% and the Tories on 18%. Surely this must be a change along the lines of the birth of the SDP (predecessor of the Lib-Dems) in the early 80s when I was studying UK politics at York University. While UKIP will perform much better in European elections than in a General Election, the polls show that David Cameron needs to take a view about what that means. When Michael Foot took the Labour Party to an unelectable far left position, many viewed that as political suicide. Cameron must now face up to whether he should take the Tories to an unelectable right position and lose the centre, or adopt a clearly centrist agenda and lose the right. The SDP was supposed to remove the centre left from Labour but, within 15 years, Labour was dominant, courtesy of a centre left (some would say centre right!) leader. There is going to be a huge change in the balance of power and, for current affairs aficionados such as me, it’s fascinating.