This weekend’s highlights are the obvious showdown at Ascot in the Clarence House and probably the best card of the weekend in Ireland tomorrow. Nonetheless Haydock tomorrow is where I’ll be and very much looking forward to it.

I have an affection for Horizontal Speed * (11/2) because he shares the same sire as Quatre Heures. He’s gone close recently and if the ground isn’t too bad this return to hurdles might be just right. However the progressive Baywing (5/2) may be just too good.

Bristol de Mai *** (2/1) opened far too big at 7/2 and should win this. Otago Trail has good form on heavy and if the first race is slower than expected should be respected.

This is completely misnamed as a Supreme trial. Nonetheless it’s an interesting race. Le Prezien **** (10/11) is the standout here at a very fair price. I also fancy Vieux Lille (7/2) in a forecast.

It’s probably folly to oppose The New One *** (4/9), winner of this last year on the same ground. However, I can’t believe that he’s getting any better and should surely be exposed to a progressive type. So is there one in the field? The short answer is “no”! I really wanted to find a horse to oppose him but can’t find one. Captain Conan is back after a long absence. Melodic Rendezvous has been campaigned well but surely his best days are behind him. I was near to backing Fou Et Sage but he hasn’t exactly delivered since moving from France and the others are there to make up the numbers.

It’s pleasing to see that the Peter Marsh Chase has retained its properly named place as an important race in the NH calendar. I think that the decision to put Reve de Sivola **** (7/2) back over fences off a good mark (10st 4lb) on heavy ground at Haydock is inspired and should pay off. Fingal Bay is OK on heavy ground and Virak has Haydock form but I think that the favourite is superb value. I cannot have Algernon Pazham at any price (tipped elsewhere).

It’s hard to get excited about this one and I can’t make a case against the current joint favourite and highest rated Morning Royalty * (3/1), second over a slightly shorter distance and with the same ground and official rating here on 30 December. Not an obvious bet.

Similar to the last race but I’m slightly more positive about another current favourite, Vintage Clouds ** (5/4), a progressive Trevor Hemmings horse, second here last time over two miles and a winner here in his last but one over today’s distance.

I can’t sign off without a view about the big one at Ascot.

Un de Sceaux ***** (8/15) is the Moscow Flyer of the current age. Wins imperiously or falls and in my opinion of an equivalent standard. Current form going into this race is 1111F including the Irish Arkle, the Arkle and the Punchestown Ryanair. A star of our time and should be 1/3.

So, in summary, the Lucky 15 is taken from the highlighted races and is:

Note: This article was first published on 15 January and has been updated (where indicated) on 8 and 9 March.

I know that a lot of people think that the NH season is too focused on the Cheltenham Festival but, for me, and evidently many trainers and owners, this is the pinnacle. So, whether it should be or not, it’s time to take a view on the big races. Needless to say all these must be taken on NRNB (no runner no bet). The picture is, of course, the incomparable Arkle.

Altior (6/1) is massive value to beat Min for an initial British win in the exciting first race. There is a pattern of Irish hot pots being beaten in this one.

8 March update: Altior has rightly shortened and there is still some 9/2 out there, now NRNB.

Ar Mad is a scarily good horse but Douvan (4/6) is even better and will win this.

8 March update: Ar Mad is out of the picture and Douvan (2/5) doesn’t now have any serious opposition. By the way, Henderson announced today that L’ami Serge goes for the JLT on Thursday (see below).

The first four in the betting are Irish and quite rightly so. Faugheen (4/7) will win so that’s the WP double within three races.

8 March update: Faugheen and Arctic Fire have gone so that makes this one much more interesting. Annie Power (see below) has been put in this for the owner but I’m unconvinced that she is the champion hurdler of 2016. Identity Thief is interesting at around 5/1 and Sempre Medici is an each way gift at 25/1.

9 March update: Very pleased that Mark Howard agrees with me in the Sky Sports preview (currently live) about Sempre Medici as a live contender.

My intuition says that Annie Power will be taken out for the season. That will clear the way for Vroum Vroum Mag at an outstanding 10/1.

8 March update: Vroum Vroum Mag is now evens. Congratulations to those of you who got the 10/1.

This is a new entry and there is no real opposition to Yanworth (evens). The potential opponents will run elsewhere.

As previously advised Pont Alexandre is an outstanding candidate at a great 10/1.

8 March update: I’m not a fan of any of the betting favourites and I’m sticking with Pont Alexandre (class will prevail on good ground) at a super 20/1. This is an article from 2013 but the point about good ground is still valid.

Un De Sceaux needs to do well in his prep, after the last outing, and will do. Get on now at 6/4 before he goes odds on.

8 March update: My view that he would follow up well was vindicated. Widespread reports from Lambourn that Sprinter Sacre is “as good as ever” but unconvinced, hence the 4/6 for the selection, Un De Sceaux.

9 March update: Denis O’Regan: Watch out for Cantlow in the Cross Country.

8 March update: Nicky Henderson announced today (8 March) that L’Ami Serge runs in this rather than the Arkle. Why? Well, in my view because he’s not good enough for the Arkle as reflected by the current 10/1 for this. Here lies my bet of the week. I was lucky enough to be at Haydock on 23 January when Bristol de Mai was mightily impressive over 2m 4f and he comprehensively franked the form at Sandown on 6 February. The prep is perfect and the current 3/1 average is an absolute gift. Lump on!

Surely Vautour (6/4) should go for this and it makes sense for the owner, given his other options. If he does, he wins. No nonsense about him staying 3m 2f 110y. Nonsense! Get the odds now. There is no serious opposition.

8 March update: Notwithstanding the reports I think that he (Vautour) might still run in this. A superb betting opportunity because the main betting varies from 4/5 (Totesport) to 9/2 (32red). You know where to go.

Lump on Thistlecrack (9/4). This horse has emerged and his last win was superb. Good to soft found will suit and there are no serious opponents. This one is the bet of the meeting in my view.

8 March update: That 9/4 for Thistlecrack was a gift. Now evens. The obvious threats won’t turn up. 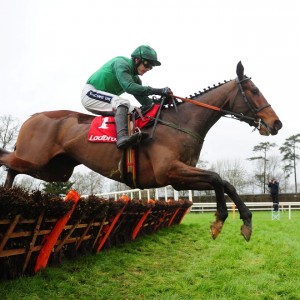 Footpad is in a class of his own at Gowran

Let’s just wait and see for the Triumph. I suspect that the winner has not yet run.

8 March update: They’ve all had their outings. Lots of hype involved in this but I think that Footpad‘s campaign has been impressive and I very much like the current 10-12/1 (will be shorter).

I’m not carried away with Barters Hill as others are. This is wide open and far too soon to take a view.

People have got carried away about this being the best Gold Cup in years. It isn’t because many of those touted are not suited to the race. It’s down to two. Forget the Dons. One’s too slow and the other is unsuited and lazy, unsuitable for a race that is invariably run in recent years at a serious pace. We can therefore narrow the field to Cue Card (6/1) and Djakadam (7/2). I think that the former will win and, remarkably, win a £1 million bonus for the Betfair Chase, King George and the big one. 6/1 is superb value right now and I would have him beating Djakadam every day of the week.

8 March update: No reason to change here. The 5/1 is for Cue Card is still excellent value.

8 March update: Over the Gold Cup course and distance here’s an opportunity to benefit from a slightly distorted market. In a Twitter poll on Sunday I voted (with the majority) for Victoria Pendleton not to ride in this, even though she is arguably on the best horse. Just imagine the rush to the first fence! This could end up very unpleasantly for her and/or the horse. Pascha du Polder is probably the best horse but that’s not the point. I know that other amateurs have defied their riding style, never better demonstrated than by the 1982 renewal(!) but this race now features good horses and, more importantly, good amateur riders and none better than Nina Carberry on the proper favourite, On The Fringe, who happens to be J P McManus’ selection of the meeting from his own horses. This used to be a race to avoid for betting purposes but, for the reasons that I’ve set out, this is now one of the best bets of the meeting at an excellent 5/2. How many times have you bet on Nina at the Festival and she’s won. Here’s another one. Will be massively shorter than 5/2 at the off (while everyone’s faffing about VP and P du P). You know what to do, sooner rather than later.