…and here is So French winning the Grand Steeple

James Reveley achieved his summit by winning the premier French Grand-Steeplechase on Sunday on an extraordinarily good 5-y-o called, appropriately, So French:

…and here’s my Cheltenham selection Footpad showing how good he is!

Here’s a very handy link to all the big races:

Links to all the big races, flat, jumps and trots!

Incidentally, can everyone please hear the correct pronunciation of “un de sceaux”! 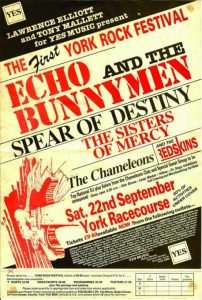 I love York racecourse. I lived very near to it for nearly a year and helped to put on the York Rock Festival in 1984 before starting my retail experiences with Virgin. What a build up, even if the day didn’t quite go as planned. As you can see it was billed as “The First York Rock Festival” and it was also the last! Initial intended acts started with U2 and Simple Minds but Echo and the Bunnymen turned out to be great headliners. The Redskins were Uni regulars and The Sisters of Mercy brought along their devoted following (thank goodness). Only those involved know how close it was to not happening!

Our highlight was to be invited to the Gimcrack dinner which this year will hold its 246th renewal. It is therefore much older than the Gimcrack Stakes which was first run in 1846. Its namesake was born in 1760 and won 26 from 36 runs. He was a grey, 14.25 hands, and in those days handicaps were allotted according to the stature of the horse. The race is run over 6f for top two year olds. Unbelievably, perhaps Gimcrack’s greatest achievement was in 1766 when he went to France and, for “a considerable sum of money” he ran a match against time and covered 22.5 miles in an hour! No likelihood of anything like that happening again.

Anyway, that was then and this is now. As mentioned in last week’s post about the Chester meeting I no longer follow flat racing closely. However, York is one of the racecourses which still appeals most to me. As bookie Geoff Banks pointed out last week, it is one of the few racecourses where, in the champagne bars, there is still no sign of a plastic glass! So, on to Wednesday’s races.

According to The Racing Post the course has avoided most of today’s rain (well at least so far) with the ground “on the quick side of good”. If I knew the horses well enough that might help!

The market says that this is between Pacify, Erik The Red and Spanish Squeeze** (9/2). The selection is trained by 2000 guineas winner Hugo Palmer (let’s overlook the drug problem last year) and is making the transition from all weather to turf. For me, the difference between three closely priced horses is the jockey, the superb Ryan Moore.

I don’t know what the golf calendar says about his possible attendance but it’s good to see Lee Westwood’s Hoof It (a York regular) in this one. Almost randomly I’ll go for George Dryden*, maybe each way at 9/1 and importantly with York form.

This is the first proper race of the day and Frankie Dettori may well win on Magical Memory but I’ll take a random each way on Jack Dexter*, a good horse notwithstanding a few less than inspiring runs, at an appealing 37/1!

The highlight of the first day of the Dante meeting and a proper horse provides the bet of the day. So Mi Dar**** is unbeaten and John Gosden’s Oaks candidate beat the colts in the Epsom Derby Trial. She is 6/1 second favourite for The Oaks and will win this at an attractive 10/11. Needless to say a decent win here will see her Oaks odds contract significantly so, if you’re a fan of the Lloyd Webber filly, a Classic bet before today’s race is worth considering.

This is a well named race! I have no particular view here so I’ve picked, more or less at random, Monteverdi*  at a reasonable 7/1.

Another in which I am entitled to as much of a view as an office cat! Kananee* is well supported at 12/5 so that will do.

This is on any reading of it a poor race and unbefitting of this meeting. I’ll finish as I started by being guided by Ryan Moore’s selection in the shape of Muhaaviz* at 17/2, so worth an each way.

No Placepots or Lucky 15s in this one because, by choice, I’d prefer the Perth evening card.

Regular readers will know that I’m not a fan of flat racing. However, a very good friend is going to be there tomorrow so I feel obliged to offer my thoughts, for what they’re worth!!

What little I know about flat racing at Chester is that the draw is important (low numbers preferred) because it’s narrow and tight and the break in the home straight can be significant.

These babies could be anything but Fiery Character *** (11/8) has good form when winning at 33/1 at Newmarket on 14 April. Drawn well (2) and was very speedy when making her debut.

This should be the first of several for A P O’Brien at this meeting. He showed last weekend that apparently good ones sometimes don’t deliver but Somehow **** (8/11) should come home easily in this one.

This is a long race for the flat and needs a specialist. Steve Rogers * (9/2) who I confess I’d never heard of until this race seems a good candidate and well drawn (3) (yes, it does matter even over this distance). Of the others I’m interested in Dermot Weld’s Silver Concorde (second favourite at around 10/1). This one didn’t really take to hurdling (last in the Supreme Novices’ at Cheltenham) so the return to the flat is notable.

This is just a lottery and any of them could win. Kimberella * (6/1) is the reluctant choice and I wouldn’t be in the least surprised if any of the others win. It’s a race where, if I was there, I’d be in the ring and watching every single move in the market. On that basis, unnamed favourite might be a good call.

Thank goodness! Now a race to have a firm view about. Maljaa ***** (9/4) is the bet of the day and this is just the start before a great season in much higher company.

Another in which to have a firm view in the shape of Mulk **** (4/11) who will win this with Exoteric second (exacta or whatever the Chesterbet equivalent is).

Don’t bother with this one unless you have to. Frankly, it’s a poor race with a mix of underperfomers and all weather candidates. If you have to, or just want to, I’d go for Soldier In Action * (on the drift at 6/1) against the favourite Red Verdon at 13/8 for an upset in the last.

For my part, I would go for: