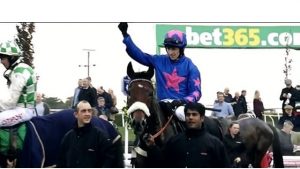 Now we’re settling in to decent weekend jump racing and the first proper race is the Charlie Hall Chase, in memory of the trainer.

Back in the day this was the first NH weekend when it was necessary to switch between channels between C4 and the BBC, for what was the United House Gold Cup Chase at Ascot, with Richard Pitman and co providing no more than average coverage, not his fault but the beginning of the BBC’s withdrawal from racing.

The big issue with National Hunt racing at the moment is finding good jumping ground. Wetherby is good, Ascot is good, and we could do with at least good to soft. Nonetheless, we have some decent races tomorrow and I’m being a bit picky so here are my limited selections.

Cue Card is one of my favourite horses and has tended to start well (Haldon Chase at Exeter and won this last year) but 4/5 is too short against Blaklion* who should like this flat track and appeals at 7/1.

I’m all against current favourite Saphir du Rheu (3/1) and all in favour of Tea For Two** (at an appealing 5/1). The latter will fall short in the big races to follow but this is a gift with the rest of the field far below what will follow.

Save for the Byrne Group Handicap Chase, where I don’t have a particular view (Yorkist probable winner but no bet), I don’t know enough about the others which is why I’m not straying beyond the main races.

This is a far more interesting market – no ground issues!

Bet on anyone against Ed Balls! This is another Anne Widdecombe scenario! This has gone way beyond the programme and there is an Ed Balls following that is going to see him at least to Blackpool.

I’m loving this market. Danny Mac is roughly evens and will not win because he has no “journey” and BBC voters require a journey. I remain of the view that Ore is not well enough known so he will not carry the heavy vote when we approach Christmas. The ones who will are Louise (7/1) or Claudia (9/1) and, as such, they are incredible value. Get on now because the odds will shorten after this weekend!

I love Saara Aalto who is 7/4 to go this weekend. Maybe I’m being a little biased towards a good singer (see my previous post) but I think she’ll survive for now.

The other voting angle is that groups don’t generally do well. That puts 4 of Diamonds in the mix so they are at risk. On merit they should survive but the story that Sony put them together before the competition could be their downfall.

Well, following the departure of my ante-post tip for Strictly, Will Young, it’s time to have a look at the run up to Christmas finals now we’ve had a chance to weigh up the live performances. 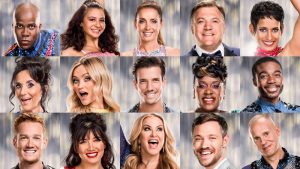 It’s a shame that Will has gone. Whatever the reason, he wasn’t shaping up well, regardless of the judges’ comments. I thought Naga was nailed on to go last week after a very underwhelming performance so, as I’ve highlighted in previous years, we have to have regard to the loyalty of viewers to their daily friends on TV. That said, you might think that Tameka would have the Eastenders posse but, putting aside all the media outrage, that was a lamentable routine, based on Beverley Hills Cop. Yes, she showed the strapping on her knee in a dig at Anastacia but, really, would you have voted for that on one of the strongest ever Strictly nights, let alone that it was week three?

So, let’s look at the remainder, from the bottom up. Strictly TV viewers would not have warmed to Anastacia, even if the vote off drama hadn’t happened. She’s been given that “star” last celeb walk down the stairs position and was the first one to be announced as what was clearly intended to be the headline signing. However she has that American lack of class that British TV viewers don’t like so we can’t have her.

You can get 150/1 for Ed Balls. He is this year’s Ann Widdecombe and his Mask dance last week was the equivalent of a novelty act on X Factor. He will last longer than he should but the price is fair.

Lesley Joseph is admirable but, my goodness, Anton did a good job of covering her limitations last week. Like Ed, she’ll be liked but will go out mid run.

Naga Munchetty got through last week but her days are numbered. She needs to up her game to get through this weekend and would be my bet to go next.

It’s a shame for her but people just don’t like Laura Whitmore. The Strictly demographic is just wrong for her. Fairly or not she fits into the ITV/Celebrity Juice vibe, which is a mile away from Strictly.

I think that Judge Rinder is a man who is playing out his perfect dream in Strictly. He’s very entertaining but won’t make the home run.

Now here’s the thing about Daisy Lowe. As Marian Keyes says, you’re either “afor” or “agin” and I’m agin. I suspect that I’m not alone. Can’t put my finger on it but it is what it is.

Ore Aduba has been very impressive but he’s not well enough known. I’d not seen him on TV until he suddenly turned up on the Olympics coverage. He doesn’t have a following and that will be, rightly or wrongly, his downfall.

A quick word about the betting order. As I’m typing this (8.30 p.m. on Friday) it’s not acceptable for Unibet, 32Red and 888Sport to be offering 10/1 Will Young. Get your act together!

Greg Rutherford is the classic sportsman without rhythm. The Robin Hood routine suited him very well but he doesn’t have the range required.

Claudia Fragapane is my counterpoint to Greg. Her athleticism has been deployed with a perfect sense of timing – a rare thing. She’s perfect Strictly audience material. Parents and grandparents will see her as ideally what they’d like from their children and the classic Italian family background fits to a tee. Assuming that she gets to the final, imagine what her show dance might be like! My joint favourite at a very appealing 11/2.

I wasn’t sure about Louise Redknapp at the start but that’s why watching the first couple of weeks helps. She’s come across as someone who is living her dream. She’s a bit restrained but her tribute dance based on Flashdance brought her to a new level. Yes, she did go to the the Italia Conti school, but she’s coming across as the 41 year old mum who is easing herself into this with the perfect partner, Kevin Clifton. At 4/1 she is my comfortable favourite.

Danny Mac has a huge problem and that is that he’s too good! He has danced as if he was the professional in the pair and that is not a winning formula. Expect him to be in the bottom two about weeks seven or eight and he’ll have to go. 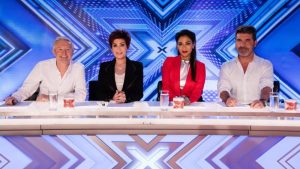 An abbreviated view because that’s all it deserves. Saara (66/1) is an amazing singer but doesn’t fit the mould so she could leave on Sunday (unfairly). Freddie and Ryan are mid term fodder and Honey G will last until about four weeks to go. Relley is a fantastic singer but that’s not what this competition is about so she’ll be another mid failure, as will Samantha and Emily (who should never have got through).

Now we get to the contenders. I think that Four of Diamonds are outstanding and will benefit from the Louis initial exclusion. Am I the only one who thinks that they were exceptional and that this will be part of the “story”?

Gifty Louise is OK but she’s no Fleur East. I think that she’s Simon’s favourite which shows why, notwithstanding his success, he’s very formulaic.

5 After Midnight are a classic competition favourite but I don’t see them as winners.

Matt Terry is currently the 5/4 favourite. Christ! He’s the classic forgotten X Factor winner. I am 100% against him. Four of Diamonds to win at an outstanding 8/1.