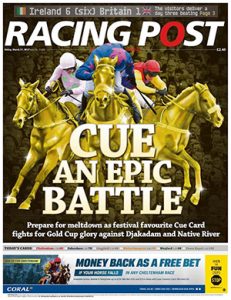 A mixed day today with Un de Sceaux delivering in scintillating style and Let’s Dance winning easily in the end, both under superb Ruby Walsh rides. Yorkhill turned out to be a reformed horse and was a very impressive winner of the JLT while Unowhatimeanharry was beaten fair and square. Overall, slightly up for the day.

Now on to the big finale and two big selections! If you want them without reading the rest they are Charli Parcs**** and On The Fringe****. It’s worth mentioning that not one of my selections has been chosen by Pricewise!

Defi du Seuil is the justified favourite. I started by supporting Charli Parcs**** for the Supreme and Defi du Seuil for this one but, having heard what Nicky Henderson has said throughout and particularly this week, I’m keeping the faith with the former. The last race has to be written off. There’s no doubt that he wasn’t running well before falling but I think that this will be his day, and the first of many top level wins. He’s a confident selection and, although the times were slow today, the ground will be better tomorrow.

I still like Coeur de Lion for a place at a very attractive 40/1. He was second to Defi du Seuil at Cheltenham on good to soft over the same distance last December and, based on that form, the price is too big.

It’s worth bearing in mind that Ivanovich Gorbatov** won last year’s Triumph Hurdle over the same course and distance and in doing so beat Apple’s Jade, Footpad and Let’s Dance. His subsequent form of 2333433, while campaigned at the highest level, makes him a nailed on each way selection.

Many people’s choice of the week is Death Duty*** and I’m torn between this one and the tough mare Augusta Kate**, who was giving Death Duty a real race when falling last time out. I’m absolutely 50/50 about them and I’ll wait to see what Gordon Elliott says about the favourite on tomorrow morning’s Opening Show on ITV4 before making my final decision.

I was on the verge of switching to Djakadam while watching this afternoon’s racing. However, with the benefit of a little more reflection I’ve decided to stick with Cue Card***. He comes to this on the back of a season including two spectacular 15 length victories in the Betfair and Ascot Chases and appears to have lost none of his ability and enthusiasm notwithstanding that that this is his 36th outing since his debut in January 2010.

Djakadam has age and an ideal prep on his side and I understand the support for Native River, but it remains to be seen whether his form is good enough and the ground won’t play to his advantage.

I will certainly be having a decent each way bet on Bristol de Mai* at a very appealing 25/1 (with Paddy Power who are offering first four).

No reason to change this selection.

I made my mind up about this one after his second to Foxrock at Leopardstown a month ago. He was not exerted with a hands and heels ride from jockey Jamie Codd and it’s his best preparation yet. 12 years old is not too old for a hunter and it’s worth remembering that his form in this race is 311. This is my second big selection of the day and he will be around evens at the off so get on as soon as possible. My bet is placed with relish.

Two weeks ago: The Storyteller (9/2). If Gordon Elliott is right this one is nailed on.

Unfortunately The Storyteller has not taken his place in this one and would have been my selection. My reserve is Battleford**, another that has progressed well from his bumpers (beaten by a nose by Ballyandy in last year’s Champion Bumper with Bacardys third and second to Bacardys with Ballyandy in the Aintree bumper). He is the class of the field with the right connections (Mullins/Wylie).

By this time I’ll be disappointed if the champagne and dancing have not taken over so I’ll get this bet in early. Rarely out of the places and returning after a break, having won last time out.