It’s the best time of the year. The National Hunt season is well under way and, after last weekend at Cheltenham, we can begin to get a view of how the Festival might map out.

This won’t be a detailed analysis; that will follow. For now, I’m setting down a marker before I get swayed by the proliferation of Cheltenham previews which will keep me busy over the next six weeks.

One big change for this preview is that you can click on the selected horses for links to their prep or otherwise relevant races. I hope that you find this helpful.

I’m taking the cards in race order and I’ll leave out the ones I haven’t yet got a clue about. There will be more pointers, particularly the Newbury meeting on 9 February. I’m not an ante-post better so I’m not recommending any of these for a current bet unless I indicate otherwise. There will be several short priced favourites, and deservedly so, so I’m already thinking about multiples which may well provide the best value.

This is a definite early call. Jezki was a mightily impressive winner of the Grade 1 hurdle at Leopardstown on what is in Ireland St Stephen’s Day. He’s aiming for a five timer and has been campaigned at the top end on soft ground but no worse. He’s an obvious choice for this one.

Simonsig deserves to be as short as Sprinter Sacre was for this last year (8/11) and yet he’s 11/12 on Betfair. Captain Conan is due out this weekend and Arvika Legionnaire fell last weekend (and hasn’t faced the same level of opposition notwithstanding two Grade 1 wins) and should definitely be included in multiples (although not top of the list).

I’m opposing Hurricane Fly. I’ve taken the view that he won a below par Champion Hurdle and his recent wins in Ireland haven’t been against serious opposition. This is a race which, as I highlighted above, hasn’t yet found its shape because it’s too early. My current inclination is towards Zarkandar.

Uncle Junior currently looks good value at 8/1 and I’m certainly interested in 13-y-o Maljimar at 25/1 after his adventures and fast finishes in the Pardubice and at Craon.

I’m convinced that this is where Quevega will end up and although Kentford Grey Lady (best of the British) did well against the other sex last weekend 8/11 for Quevega is yet again great value and another candidate for the multiples.

Pont Alexandre – three wins in three runs and has done nothing wrong. However, in his only two proper races the ground has been heavy and soft to heavy. However I’m not put off and 7/2 is a fair price. I don’t think that The New One will win and that makes him 10/1 against the field.

Traditionally, and perhaps unfairly, the horse breaker, this undoubtedly requires a young but redoubtable stayer. Dynaste fits the bill and the current 5/2 against a field with next Boston Bob 7/1 and 12/1 Back In Focus is an immature but consequently appealing market. This is one for an early bet because his odds will undoubtedly shorten.

The race and bet of the meeting. 2/5 Sprinter Sacre is in my view very generous, particularly when you think about the likely opposition. Is the horse likely to fall? – no. Is the horse likely to be beaten by any other horse over 2 miles? – no. Someone suggested doing the double before last Saturday’s race – I wish that I had! Anyhow, this is one to include in all multiples and I expect an imperious performance similar to Master Minded’s demolition of the field in 2009 (when he was 4/11).

This depends on whether Dynaste goes for this or the RSA. As indicated above I’m assuming that he’ll go for the latter. If so, Captain Conan should be a short priced and justified favourite. He’s due out this weekend in the Scilly Isles, currently 4/9, and it’s notable that only three of the six entries are currently quoted. I can’t have any of the other likely runners so the current 4/1 looks like outstanding value.

This is a dilemma because we need to see how Flemenstar gets on in the Irish Hennessy on 9 February (for which he’s currently 6/4). I expect that he’ll run well without convincing. It’s no criticism of Peter Casey but he’s currently entered in the Champion Chase, Ryanair and Gold Cup so what’s his best distance? Based on what I’ve seen he’s a fast horse and the Ryanair is ideal but I’m not convinced that the trainer will be able to resist the Gold Cup (which I don’t think he’ll win). If he runs in the Ryanair, he’ll win. I’m assuming he won’t and on that basis my selection is Cue Card, based above all on his Exeter run over an extended two miles. He has top notch Cheltenham form and I think that Colin Tizzard will see this as the ideal option. Nearly all the others at the top of the market are likely to have other targets or have big question marks.

What is there not to like about Reve de Sivola? Currently 5/1 co-favourite with Oscar Whisky who he beat fair and square (albeit closely). I’ve heard it said that Oscar Whisky should beat him on better ground but I’m not having that. He has decent form on good ground at Cheltenham, even when chasing which turned out not to be his forte. On the contrary Tidal Bay’s renaissance is as a chaser and his likely run here is all about Big Buck’s absence rather than a targeted campaign. The Wetherby win over hurdles was commendable but that’s not sufficient for a World Hurdle selection. Unlike the leading two Bog Warrior lives up to his name as a soft ground specialist but, having seen him on a trip to Gowran last week, I’m not convinced.

I’m wary of others who haven’t yet been let out for this but, based on the runs to date, I can’t see any reason to oppose Rolling Star after his easier than it looked win at Cheltenham last Saturday. 6/1 is a fair price and could be much shorter come the day.

I’ll pin my colours to the mast now and say that I don’t see Bobs Worth as a winner. Yes, he has excellent form including at Cheltenham but he’s not beaten Gold Cup candidates, has been sparely campaigned and I don’t see the Hennessy as a worthwhile trial for this. My confident selection is Silviniaco Conti, whose profile is ideal and, above all, he’s the coming horse. The win at Haydock showed clearly that he can do this: “Made all at steady pace with slick jumping, shaken up between last 2, steadied going into last, ridden run-in, stayed on, in command final 75yds” (Racing Post comments in running). There’s another outing due in the Denman Chase at Newbury on 9 February, following which I’m confident that he’ll be vying for favouritism for the Blue Riband. The current 7/1 is outstanding value. 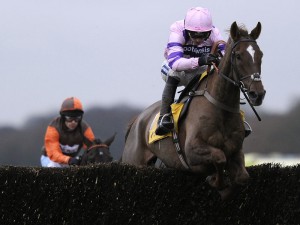 Any followers of this page will know that I love National Hunt racing and tomorrow will be my first outing of the season. I’ve also accepted an invite to Cheltenham so I’m now in full NH mode! We’ve got good to soft, good in places so, as a general rule, I’m with fit horses coming back after a summer break rather than summer jumpers.

2.25 I wrote this one up and changed my mind so approaching with caution. Initially with Rumble of Thunder but I have to go with Reindeer Dippin (13/2) with really good form here at the National meeting and trusted to be fit. I’ll make a point of checking him out in the parade ring.

2.55 I have a strong view about this. There were familiar names in the entries (even 14-y-o Mister McGoldrick) and these veterans’ races are nearly always won by ones with recent form, rather than those which are just given a chance late outing. Treacle will win this. No value but this will be won by a margin.

3.30 Master Minded will be fit and ready to win. Track and opponent form and Albertas Run is in and out and generally more out on his first outing. Albertas’ owner loves Aintree but his big missions are later in the season and, unlike MM, he needs things to be right. That said he has career winnings of nearly £800K. However, Master Minded has won £999,772 and this is his chance to break the million. MM is one of the best horses in training and that will show. Another to be checked in the ring but I’m expecting a near as damnit fully fit horse. Paul Nicholls says that he’s not going to be at his peak in October and that defeat to Albertas Run would “not be a disaster” but I get the strong feeling that he’s fit and ready to win. 1/2 is obviously not great value, unless you want to make 50% in 10 minutes!

4.05 This is a tough race and possibly a placepot breaker. I’m looking at it from that point of view so the focus is on place positions in worthwhile races. Gormanstown Cuckoo is the selection. What a Warrior is my saver and, if I’m worried about it, I might also have double saver on Lady Karinga.

4.40 This is the big risk, and probably betraying my preference for French horses with French form, but I’ve taken a view that Edgardo Sol is a good horse. I’ll have a win bet but for the placepot Flinty Bay is the saver. I don’t like Havingotascoobydo which was entered for numerous races and has ended up here.

5.15 Gansey is at his best in the mud in the depth of winter and is therefore disregarded. Others appeal but my marginal favourite is Red Admiral who will need to show that the long time off doesn’t matter. Accordingly my placepot saver is Fine Parchment (this is getting expensive!).