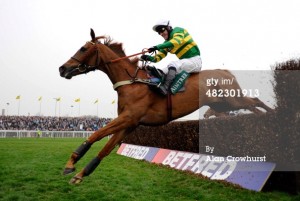 Well it was a middling day overall – a princely £9.40 up. I couldn’t have been more wrong about the first race but order was restored with the forecast delivering nicely in the second. Cue Card would have won handsomely were it not for the impressive performance of Tea for Two, which I would never have called. I’m sorry that Empire of Dirt was found to be lame but, as I said, he couldn’t have been my choice anyway. Buveur d’Air duly delivered. On The Fringe made a serious blunder at The Chair and Parsnip Pete made a mistake in the back straight which cost him any chance in the next. I’m convinced I’m not alone in thinking that Theinval was all over the winner in the Red Rum Chase, only to be nabbed on the line by the heavily supported on the day Double Ws. I’m glad I mentioned Dame Rose for the bumper and she duly obliged at 14/1 (although sadly I wasn’t on).

I have to pay respect to Silviniaco Conti who has run his last race today and served me very well in his illustrious career. It took about half his time for racing people to pronounce his name correctly and some never quite got it. Happy retirement my friend.

Now on to Friday which is, overall, much more difficult.

I don’t have a strong view about this race because the ones I was interested in when the entries were announced have not turned up. Nicky Henderson could well take this one with Thomas Campbell or Rather Be, both at the head of the market. Although he’s not lived up to initial expectations I still think that course and distance winner Clondaw Kaempfer* has a good race in him and is worth a go with Skybet for a first six each way at 22/1. However this is my least confident selection of the day.

We’re back to the Grade 1s although you might not know it from the field. I’m firmly against Moon Racer and equally firmly in favour of River Wylde*** to take this one. People have crabbed the Supreme form, mainly because (unlike me) they thought that Labaik was a freak winner. I disagree and I think that this is an ideal opportunity for him to follow up on his valiant third in that race with a comfortable win here at a shortening 5/2.

Would you take 4/7 about Might Bite who was wildly erratic when just winning the RSA by a nose from Whisper who is 11/4? All week I was going to say yes but I have a nagging feeling that Aintree and, in particular, the run from the second last to the last, might just find him out. Frankly, I think that the horse is a bit mad and the price is just too short. There’s also a good case for avoiding RSA runners who were in the mix at the finish because there is a trend for them not to follow up. However, I can’t have any of the others so I’m going to go for the value and my thought that the course will suit better and side with Whisper** at 11/4 to reverse the result last time out.

I may be taking loyalty a bit far but I have a feeling that Uxizandre** (7/1) may have bounced in the Ryanair. If I’m right he can take this over 2m 3 1/2f. Fox Norton gave his all in the Champion Chase, in which God’s Own made mistakes. I see Sub Lieutenant as the biggest threat.

Above all I’m just looking forward to watching this race with a maximum field of 30 taking part in another spectacular event.

There are lots of reasons not to like a number of these runners so we can thankfully whittle down the field a bit. My candidates are third in the Festival Plate Bouvreuil and the excellent Grand Sefton winner As de Mee**, both for Paul Nicholls. I prefer the latter at an appealing 10/1 each way (first 5 at 1/4 the odds with Bet365). I think that Go Conquer is a talking horse and I’m unconvinced that Gold Present will finish his race in the particularly testing Grand National course run in. The Munir/Souede NTD runner Ballykan is another each way interest at 33/1.

Initially this looks challenging but it boils down to a three horse race and, ultimately, only one winner, albeit with a live outsider for an each way stab. We can’t have West Approach after he was pulled up in the Stayers’ Hurdle and didn’t seem right. Constantine Bay overcame trouble in running to come fourth in the Albert Bartlett but The Worlds End*** (5/2) is my horse to take out of the race. He fell at the second last and knocked Constantine Bay seriously out of his stride but, having watched the replay four times, I’m convinced that he was going better at the time.

Debece* is the each way selection, currently varying from 10/1 with SkyBet to 16/1 with BoyleSports. He’s had a nice break (35 days) and could go well. Having said that Timeform have him nearly 20lbs behind the leading candidates. Bet365, Coral and Ladbrokes lead the offers with 1/4 the odds first three.

Another bumper, but perhaps a better one!

Money doesn’t always talk but Black Op** (7/2jf) cost a cool £210,000 and backed up a point to point win with a taking first bumper win, beating the ludicrously named Claimantakinforgan at Doncaster in February by a little over 2 lengths. They were well ahead of the rest. Having watched the replay, the selection was green and could come on a lot for that race, albeit that the runner up was conceding 7lbs.

I don’t have a strong view this year but, for what it’s worth, Vieux Lion Rouge** (12/1) is my idea of the winner with Ucello Conti* (20/1) worth an each way bet to equal or improve on his 6th last year (BetVictor 1/4 the odds first six and Paddy Power 1/5 the odds also the first six if, like me, you can’t bet with the former!)