A great first day, most of all with the performance of the day by Footpad in the Arkle. Apple’s Jade was a surprising disappointment and Kalashnikov and Ms Parfois both went very close. Beware The Bear’s fourth in the Ultima topped up the profit on Footpad so I’m ahead leading into today’s racing.

Embed from Getty ImagesWe start with the one that, for many, is the Irish banker of the week. There is nothing to fault about Samcro and both ground and distance should not inconvenience him. 8/11 is a betting price and I see no need to look beyond him.

Here he is winning easily in the Deloitte at the Dublin Racing Festival:

As At The Races said after that one “Seven from seven, and rampant winner of his biggest – time to believe the hype”.

I can’t have any of the others against him.

Embed from Getty ImagesBlack Corton has been a favourite of mine since very early in in the season and I’m not going to desert him now. He is a course and distance winner and graduated to the top level with his Grade 1 win in the Kauto Star Chase on Boxing Day, having won a Grade 2 in his previous outing at Newbury. His prep race in the Reynoldstown at Ascot only confirmed what we had seen before, also confirming his ability to handle soft ground.

Here they are winning the Kauto Star Chase:

Monalee and Presenting Percy are the obvious threats. Monalee is as hard as nails and both of them should be able to deal with the ground. It would be no surprise if either of them won but I’m drawn by the undoubted resolution of Black Corton and the price.

Embed from Getty ImagesThis is one of the races that could very well see a long price winner but Max Dynamite is without doubt the class in the field. Like Wicklow Brave, notwithstanding his exploits on the flat (including third in the Melbourne Cup), he has winning form on soft (albeit a long time ago in a maiden hurdle) and his big field experience is a big plus. I think that Wicklow Brave is the better of the two in this discipline but this is much more winnable.

However, Max Dynamite’s performance coming third in the race that stops the nation, The Melbourne Cup, is mightily impressive:

Embed from Getty ImagesI’m convinced by those who know much better than me about these things that Altior will not be inconvenienced by the pus in his foot a couple of days ago. On that basis I’m reverting to him as the strong selection.

Douvan would be at least his equal on his best form but after a year off, with no prep and with doubts about his participation he must be running here more in hope than expectation.

There is value in Politologue each way at 14/1. A commanding winner of the Tingle Creek and the Desert Orchid Chase, this one is an obvious candidate.

Embed from Getty ImagesPeople have knocked this race since it was introduced and I see that gobby controversialist Mark Winstanley, aka “The Couch”, called it The Circus Race a couple of days ago. Anyone who understands National Hunt racing (look at the banks racing and prevalence of cross country racing in France plus the Velka Pardubice in the Czech Republic, let alone hunting) will know that this was a long overdue addition to the Cheltenham Festival card in 2005. The international cross country series The Crystal Cup is offering prize money of 700,000 euros this year.

Enda Bolger had a well deserved stranglehold for years but this time round Gordon Elliott holds the main cards. As reported in a previous post Gordon was supposed to be all over Tiger Roll. However, I watched the Racing Post/Betfair preview on Saturday evening (when others were probably watching Ant and Dec’s Saturday Night or Pointless Celebrities) and there’s no doubt that he thinks that Cause of Causes will win. Of the others, I like Bless the Wings but he’s also  trained by Gordon Elliott.

Cause of Causes seems to have been here for ever but is only a 10-y-o. He’s a Cheltenham specialist who frequently disappoints before coming to light here. This is more winnable than most of his other Cheltenham challenges and the current 5/2 is just fine.

I couldn’t resist giving you the French version of his win last year (sa quatrième succes à Cheltenham) <<I’l a pris l’avantage>> and a good mention for <<Bless Ze Wings>>:

Embed from Getty ImagesMitchouka is ideally placed here, having won four of seven hurdle races and tested at the highest level. Very appealing at 9/1.

Mercenaire is an interesting outsider at 25/1. 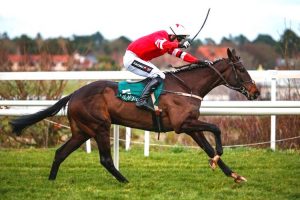 I selected Blackbow after watching his very taking win while at the Dublin Racing Festival and, with the defection of Hollowgraphic, I’m pleasantly surprised that he’s holding at 5/1.

Of the others, I’m not alone in thinking that Acey Milan, on a four-timer and with the 8lb swing for a four year old, presents serious opposition.

As always, I’ll wait for market moves and may well change my selection moments before the race.

After last weekend’s very pleasing four from five selections (no favourites when selected) on Saturday and the fifth lost to a 25/1 winner, plus (admittedly more favoured) Fox Norton, Slate House and Faugheen on Sunday, here we go again. Not expecting that I can simply repeat with night before selections, you can see from the earlier posts that I selected entries of interest over the last couple of days so that there is a measured (and not market dependent) process applied.

The ground is hugely important this weekend. I’m typing this (Friday at 7.15 p.m.) as I can hear heavy rain with a hint of hail on the Wirral, not that far from Haydock. As aficionados know, there are three main UK racecourses that have a tendency to produce knackering ground – Haydock, Chepstow and Doncaster (others include Sedgefield). I’ve resisted checking the penetrometer ratings because I don’t need to know what happened 24/48 hours ago.  I suspect that once we get going tomorrow there may be numerous non-runners at Haydock, particularly because the chase course is scheduled to take a bit of a hammering. Good luck Kirkland Tellwright (clerk of the course) who’s had a bit of a chequered history.

Carter McKay (13/8) was the entry selection but I think that MinellaforDollars* (5/4) might win.

Sharjah*** (5/4) will win. Chosen with the entries and happy to stay there.

Battleford, C’est Jersey, Monbeg Notorious were the early choices and only the latter makes it to the decs. That’s no problem with me – can’t have Tin Soldier at 8/13! Go with Monbeg at 9/4 (now 6/4).

Haydock (heavy, soft in places on the hurdles course)

Ainchea, Claimantakinforgan, Dynamite Dollars, Whatmore were the notable entries. From them, just Dynamite Dollars**** makes it to the race. Another short odds selection (15/8) but justifiably so.

Russe Blanc (7/2), Emperor’s Choice (5/1). Both selected on Wednesday. Both are heavy ground specialists and will relish the (attritional) marathon trip.

I fancy Clan des Obeaux** (4/1) to prevail against a decent field.

The Worlds End and shortening Champers On Ice properly head the market. One to watch

Former Peter Marsh winner Bristol de Mai*** will never have better conditions and should add this Grade 1 at 7/4.

Smad Place, Frodon and Top Notch have all stood their ground. Would love to see Smad Place win but my interest will be Frodon* at 14/1 e/w.

A great race for a small field and I fancy Defi du Seuil to give way to Lil Rockerfeller** (3/1).

A shame that Speredek is not running but my bet of the day is the excellent San Benedeto**** at an appealing 100/30.