I was not too far off the mark today (Friday), as you can see here and particularly pleased with Willoughby Court’s win. We would have had a nice big race double were it not for the remarkable performance of Beer Goggles, defeating Unowhatimeanharry. It was clear from some way out that Thistlecrack was not going to be the winner. Now, if you’re a small scale trainer and you get hammered for schooling in public, are you entitled to be somewhat miffed by the “not knocked about” performance of Thistlecrack who, according to the trainer, is now nicely primed for the King George? Yesterday, I quoted the trainer saying that this was his “racecourse gallop”. Hmm. As it happens, I take the view that his fifth of six revealed that he is not at all “nicely primed”. Both trainer and assistant (Colin and Joe) were keen to emphasise that he was race fit. I suggest that you have a look at the last three furlongs (courtesy of ITV) and tell me that he wasn’t gently treated when obviously not going to win.

On to a great Saturday and the best pre Boxing/St Stephen’s Day December cards.

Cap Soleil**** (2/5) is dominant in this field and will surely see off Dame Rose. She is one of the top prospects for the season and will surely be a player if correctly entered next March. Not a betting proposition at the price unless you want to play with big money.

I can’t believe that my favourite pair of the season so far, Black Corton*** (a great 13/8) and Bryony Frost, are back out again for a potential six timer in a Grade 2. Paul Nicholls did say that he might as well keep going with him until he hits the wall, but this looks like another winnable race. He’s tough as teak and this placing has turned out to be a great opportunity to add to that excellent record. I think that this is my bet of the day because there’s a good case for saying that he should be odds on against a poor field for a Grade 2.

I could tell why I think that lots of these won’t win and, after reflection, Gold Present probably should win this but I can’t put him forward as a selection, particularly after Tully East’s failure last time out (2nd to the latter in the Close Brothers Novices’ Chase at the Festival). One to watch and take ideas from.

This is another where I don’t have strong view. I might just have a little dabble with Coeur de Lion* for a place at 9/1 because the trip might suit.

Now, thank goodness, it’s time to take a view again! Regular readers will know that I’m a big fan of Charli Parcs***** at an excellent 3/1. He didn’t’t deliver when push came to shove last season but I think that he absolutely oozes class and can start this season in the same way he did last. Absolute bet of the day (sorry, yes, I now that’s the second one), in the hope that he’s summered well and will now become a serious candidate at the top level.

All the talk is about WP’s Munster National winner Total Recall who has a serious weight increase here. Paul Ferguson and other equally highly respected analysts see this as one for Singlefarmpayment.  However, I think that this is the time for American** (6/1) to make the breakthrough to the top level, with course and ground to suit. Whisper (8/1) is respected and A Genie In Abottle (10/1) is good value for a place (especially with the big race offers for extra places).

I quite like (no more than that) Baby King* to take this at an appealing 4/1.

Well, this is always that strange day when perhaps the biggest favourite for the ante post Cheltenham market runs in the north east.

Buveur d’Air doesn’t face any serious opponents in the Fighting Fifth and the 2/9 reflects that. Given the weather this week, I see that as the most likely opponent (soft, heavy in places).

I must be getting old because I’ve thought in recent years that this was never the same after relocating and I see that this was back in 2005 (from Chepstow).  I always remembered it as a slog and it could well be again. However, this features another horse who I think has lots more to come in the shape of Beware The Bear*** who I think is very well priced in this one at 3/1.

Having now measured it all, the bet of the day is a double: Black Corton and Charli Parcs. Bet placed for a £98.40 return to a £10 stake.

By the way, Sunday is probably an even better day for Festival prospects, including in Ireland, Meri Devie (surely at last!) 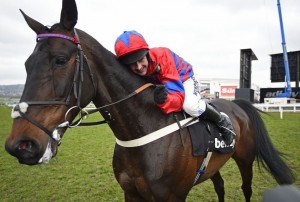 Yesterday was a bit of a washout from the betting perspective with just (and only just) Diego du Charmil delivering in the Fred Winter. Un de Sceaux was a big loser in the Champion Chase but, like almost everyone else, I was delighted with Sprinter Sacre’s remarkable performance. Just visually I have to put Un de Sceaux’s failure down to the ground and, albeit on the new course and with overnight watering, that has to be a consideration today.

We don’t have another Vautour for this like last year but we do have one of my favourite horses of the season, Bristol de Mai***, who has come into his own over jumps this season. The ground is a major concern. He’s never run on better than good to soft and the ground is officially good, good to soft in places. However, it’s the first race on the new course on new ground so I’m going to take a chance at an excellent 5/1. Would have been five stars if it was not for the ground concern.

My two for this are Our Kaempfer* (10/1), apparently laid out for this, and Missed Approach* (12/1). Both have excellent profiles for the race but this is one to bet in only if you’re determined to do so.

I’ve made my view about this clear since mid-January and now it’s come to pass. I won’t have the comments about him not being 100% – that was surely just a cover for the late decision. This is Vautour‘s***** race for the taking and I would have him in a bracket with Douvan and Vroum Vroum Mag (but then I would have had Un de Sceaux making up the quartet). In any event, now is not the time for the faint-hearted so it’s time to go all-in at a generous double your money Evens.

Another favourite of the season in this one in the shape of Thistlecrack****. I was on him at 25/1 at Aintree last April (although not on the basis of detailed analysis!) and his progression this year gives the impression of a horse that won’t be beaten for a while to come. 5/4 is another very decent price. Of the others there was a positive word from the yard for Whisper (11/1) on The Morning Line.

This is a far harder race to solve. Johns Spirit* is a clear 6/1 favourite and my selection based on the market and his excellent record here. An outside selection is spring horse Baily Green* who has no recent form of note but is likely to benefit from better ground and is worth a small nibble at 40/1.

A new race which has a very short priced Mullins favourite in the shape of Limini. Although many have talked of her as a bet of the meeting I’m less convinced and I don’t think that two decent performances warrant the 8/11 price. I prefer Bloody Mary** (12/1) who is on a seven-timer, albeit with only one run in the UK (having run in bumpers in the French provinces before a win at Auteuil prior to being purchased by JP and placed with Nicky Henderson). I think that profile of this one is just as good as Limini so the price selection speaks for itself.

There are lots of familiar names in this race and much of the preview talk has been about Doctor Harper. However, Cause of Causes*** has served me well in recent years and has an undoubted Festival pedigree (runner up in this race in 2014 and winner of the National Hunt Chase last year). This is another one who tends to save his big performances for the big occasions (also a reasonable eighth in last year’s Grand National). He was fifth of five in his prep race in January 2015 and fourth of five in his prep at Gowran this year and it’s reasonable to assume that a pattern is being followed. I had been hoping for a bit better than 6/1 on the day but he’s still worth a go, bearing in mind that many in this race have little or no chance.